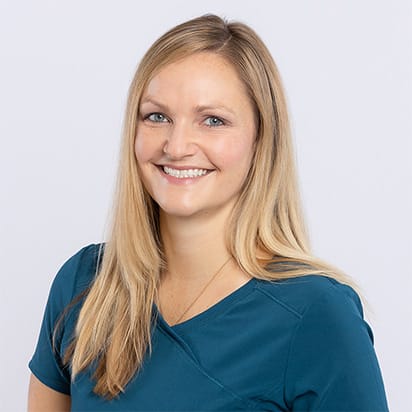 Dr. Michaela Gruenheid was born and raised in Germany. She began her veterinary medicine education in Budapest, Hungary, and in 2009, completed her veterinary medicine degree in Munich, Germany. During her last year of veterinary school, she participated in several externships in the United States. It was during this time that she decided that she eventually wanted to return to the States because she appreciated the training that the students, interns, and residents received.

While working at two referral practices in Germany for almost 5 years, Michaela completed the ECFVG® certification (Educational Commission for Foreign Veterinary Graduates) to get licensed in the United States. After receiving the ECFVG® certification in 2014, Dr. Gruenheid was accepted into a surgical fellowship program at Michigan State University. Later that year, she was offered a surgical internship at Washington State University. In 2015, Michaela moved to Ohio where she completed her residency and master's program at The Ohio State University. She then moved to Pennsylvania in 2018, where she worked as an orthopedic and soft tissue surgeon at a large referral hospital outside Philadelphia.

Michaela and her husband were married in 2013, while still living in Germany. Together they have two Rhodesian Ridgebacks, Summer and Sky. Dr. Gruenheid joined MOVES® in the spring of 2021, the same week that she achieved board certification through the American College of Veterinary Surgeons.