Spaying or Neutering Your Cat 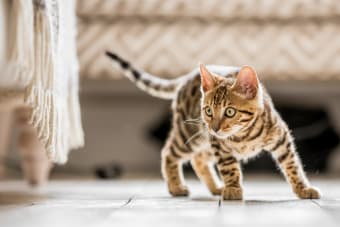 Having your cat spayed or neutered can provide a number of benefits for your cat's health, prevent unwanted litters and curb undesirable behaviors. But what specific benefits does it offer your beloved pet, what is involved in the procedure and when should you have it performed on your kitty? Here, our West Chester vets explain the details of spaying or neutering your cat.

The Importance of Getting Your Cat Fixed

Every year, over 3 million cats enter the animal shelter system in the United States according to the ASPCA (American Society for the Prevention of Cruelty to Animals).

Spaying or neutering your kitten or cat is critical in helping to reduce the number of unwanted cats in West Chester shelters.

On top of reducing the number of unwanted cats in your area, neutering and spaying also help curb undesirable behaviors and reduce your feline friend's risk of developing a number of serious health conditions.

Getting Your Cat Fixed - Neuter or Spay

When talking about having your pet spayed or neutered, the term "fixed' is often used as an umbrella term for both procedures.

When your male cat is neutered, their testes are surgically removed. This procedure is also called castration.

Removal of the testes prevents the production of sperm. This means that once your male companion has been "fixed," he won't be able to father kittens anymore.

When your vet spays your female cat either their ovaries or both their ovaries and uterus are surgically removed from their body.

After this procedure, your cat won't be able to have kittens.

Benefits of Neutering Your Male Cat

Neutering your male cat is key when it comes to controlling the local cat population. While, of course,e male cats don't bear kittens themselves, just one unneutered male cat in your neighborhood could potentially father hundreds of kittens to different females. In order to prevent the birth of any unwanted kittens, it's just as important to neuter male cats as it is to spay female cats.

Neutering your male cat will also help to curb the spread of illnesses like Feline immunodeficiency virus (FIV) and Feline leukemia virus (FeLV). These are often spread from cat to cat during fights and, since unneutered male cats tend to fight more than neutered ones, fixing your kitty reduces the number of fights and injuries sustained while fighting. Your cat's risk of injury by vehicle will also be reduced since neutered cats will often roam less than intact ones.

Unneutered males will spray to make their territory and will often fight other male cats. This behavior can be noisy, smelly and really bothersome. Having your male kitten neutered will help to prevent him from spraying inside your home as he grows older and will generally reduce his level of aggression towards other cats and people.

Benefits of Spaying Your Female Cat

Before your kitten is even 6 months old, she may be able to bear kittens. It possible for your cat to have up to 4 litters a year and their average litter can range from 2 to 10 kittens. This means that, in only one year, your cat could produce as many as 40 new kittens! That's a huge number of cats that you may not want to home. Help to reduce the number of unwanted cats in the West Chester area by spaying your kitten before she matures enough to have kittens of her own.

Spaying your kitten before she has her first heat can help to reduce her risk of pyometra and mammary tumors later in life, Female cats that are carrying infectious diseases can also pass these conditions on to their kittens who go on the spread the illness themselves. By spaying your female kitten, you will help to prevent the spread of these diseases.

Additionally, birthing and pregnancy can be difficult for cats and caring for a pregnant cat can be costly and time-consuming.

According to recent estimates, cats in the USA kill between 1.4 billion and 3.7 billion birds each year. By getting your cat fixed you help to save the lives of countless birds and other wildlife creatures.

If you don't spay your female cat, she will frequently go into heat throughout the course of the year. This attracts male cats to your home from across your neighborhood. Unneutered male cats can be a problem since they will often spray, be loud and fight one another. In order to keep uninvited male cats from the area around your home, make sure to spay your kitty.

When Should You Get Your Cat Fixed?

Kittens are able to be spay or neutered at as young an age as four months old. Adult cats can also be spayed or neutered. That being said, every pet is unique and your veterinarian will be able to advise you on when you should have your cat neutered or spayed depending on their particular case.

For female cats, spaying them before their first heat will help them avoid certain serious health conditions as well as an accidental pregnancy before you have the chance to spay her. For males, if they are spayed sometime before 10 months old, they are much less likely to spray and urinate inappropriately throughout the house.

To learn more about having your kitten neutered or spayed, contact West Chester Veterinary Medical Center today for more information and to book an appointment.