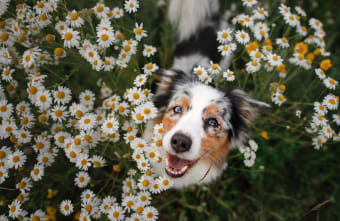 Ehrlichiosis is a tick-borne disease found in dogs and caused by a few different kinds of bacteria referred to as Ehrlichia. Here, our West Chester veterinary team walks you through the causes of this disease, its symptoms and its treatments.

While there are many kinds of Ehrlichia bacteria, two are most prevalent in the United States:

This bacteria lives in white blood cells called monocytes and causes the disease which is commonly known as Ehrlichiosis. It is primarily carried by the brown dog tick (Rhipicephalus sanguineus). It isn't know for how long the tick needs to be attached to a dog in order to transmit this bacteria and infect your pup with Ehrlichiosis. Previous studies estimated within 48 hours, but this timeframe is likely too generous.

This bacteria lives in white blood cells called granulocytes and causes a less serious version of Ehrlichiosis. It is most often carried by the lone star tick (Amblyomma americanum). Dogs who are infected with this kind of Ehrlichia bacteria generally develop milder symptoms, or may not even appear to be infected at all. But often, symptoms will involve swollen or stuff joints.

What are the Symptoms of Ehrlichia Canis?

There are three phases to Ehrlichiosis caused by Ehrlichia Canis, acute, sub-clinical and chronic. Each phase of this disease has differing or no symptoms at all. Symptoms only begin to appear between one and three weeks after infection. Here are a selection of the most common symptoms of Ehrlichiosis from all three phases of the disease:

What is the Treatment and Prognosis for Ehrlichia Canis?

Diagnosing Ehrlichiosis can be a difficult process. The disease is only diagnosable two to three weeks after your pup is infected, once symptoms have begun showing. And if you get your pet tested before then, even if they have been infected, the tests will result in a negative result.

If Ehrlichiosis isn't detected in your dog beforehand, it can be even more difficult to diagnose in its sub-clinical phase.

When your dog is diagnosed with Ehrlichiosis, regardless of its phase, you have a number of treatment options. Most often, your vet will prescribe an antibiotic such as doxycycline for your pet. While your dog will have to take a month-long course of this antibiotic, you should notice an improvement in their conditions within a couple days.

The prognosis for pups in the acute and sub-clinical phases of this disease. With a course of anti-biotics and further testing to ensure the disease has been eliminated, your dog should be able to make a full recovery. For dogs in the chronic stage, however, treatment is much more difficult since they are weaker and more debilitated. Treatment for dogs in this phase of the disease may involve blood transfusions in addition to the regular course of antibiotics and the mortality rate is much higher than in earlier stages of the disease.

Even if your dog has already has Ehrlichiosis, they can be reinfected since Ehrlichia immunity isn't lifelong. Because this disease can be dangerous if it isn't caught early, your best bet for keeping your dog safe from Ehrlichiosis is prevention.

If your dog has been in areas where ticks are known to live such as farmland, forests, or areas with tall grass, be sure to inspect your dog's skin for ticks as soon as you get home. Most ticks are dark brown or black in color and fairly large once they have begun to feed. An online search should help you to learn what ticks in your area look like and where they are typically found.

Do you suspect that your dog has been showing symptoms of Ehrlichiosis? Have they recently walked through high-risk areas for ticks? Contact West Chester Veterinary Medical Center to book an appointment today.